Back in December 2020, 88 young people aged 14-18 from across the family of Aldridge schools and colleges submitted entries to the Aldridge Junior Signature Art Prize, and KAA’s own Hanna (13 Roosevelt) was shortlisted in the Fine Art category for her painting “Liza Mahu”.

Artellite’s Signature Art Prize is the only award of its kind that aims to promote the work of artists in the emerging stages of their careers. Drawing attention to the unique perspective of students and recent graduates, it celebrates and identifies emerging artists’ ‘Signature Style’.

Following the announcement of the shortlisted artists at the beginning of the year, students had been eagerly waiting to find out who had won in each of the categories: Fine Art, Photography, Textiles & Graphics. After being delayed considerably due to changing Covid guidelines, the exhibition and awards ceremony finally took place at the Bankside Hotel in London, on 23rd September 2021 and we’re thrilled to announce that KAA’s Hanna (13 Roosevelt) was awarded winner of both the Fine Art category and the overall winner. Hanna’s win has secured her an internship with Artellite. 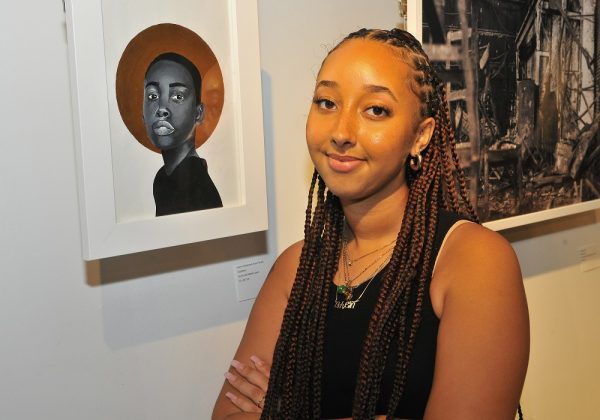 Hanna with her painting at the Aldridge Junior Art Prize exhibition

Following the announcement, Hanna said “It was a completely new concept to me that other people enjoyed my work as I had never shared my art outside of the classroom before. I felt very proud of myself.”

Hanna also took the time to explain more about how her painting was created. She said: “I created this piece in the summer of 2020, amidst the uproar and outrage of George Floyd’s death, which sparked protests globally. During the London protests, I noticed how many people responded to the outcry of the BAME community by simply ignoring and dismissing the very real issue of racism and discrimination within the UK.”

“I wanted to create a piece which drew light to how black and mixed ethnic citizens of the UK were ignored, uncared for and treated as second hand citizens. However, instead of perpetuating the same, disheartening message I instead wanted to highlight the beauty and ethereal nature of BAME people, by celebrating our uniqueness, resilience and excellence. I called the piece ‘Liza Mahu’ after the African Sun Gods – Mahu and Liza, who are the twin children of Nana Buluku. It represents, sunlight, hope and serenity.”

Hanna is now finishing her final year of Art Level and making applications to study an Art Foundation next year. She hopes to study at University of the Arts London (UAL) or Kingston University. We look forward to seeing more of Hanna’s stunning and thought provoking work this year and beyond as she develops as an artist and painter. 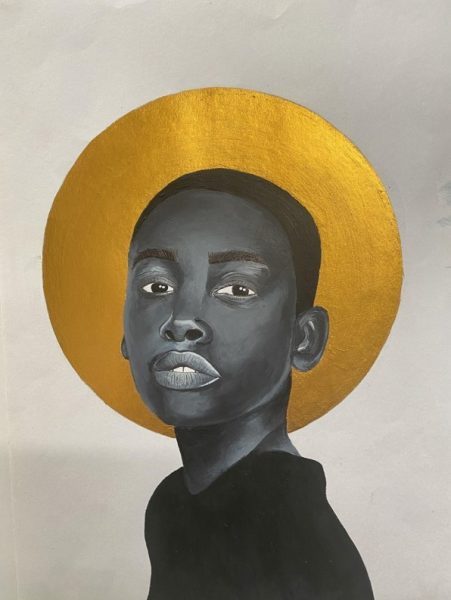